Action Rider Tack, in partnership with Toklat Inc, is sponsoring two Action Riders heading for the famous 100-mile Tevis Cup endurance ride this year! The two endurance riders are Gina Rice and Stacy Motschenbacher, who ride and train together in southern Oregon. Action Rider Tack and Toklat admire their dedication to the sport of endurance, and the commitment it takes to make the journey to the Tevis ride.

Gina Rice is preparing and training her home-bred chestnut Arabian filly, Biscuit, for the Tevis Cup this August, 2015. Biscuit is now 7 years old and approximately 14.3 hands.  Gina started her under saddle gently as a 3-year-old. Gina made the commitment in January that Tevis would be her goal in 2015 and started conditioning and training that same month. She averages 20 miles a week on Biscuit. Gina also owns Biscuit’s mother, a grey Arabian named Fanciful Figre (Tigger) and she is her back-up horse for Tevis. Tigger is a 15.2 hands, 13-year-old Arabian mare bred for racing with Tiki lines – pure Polish – at Darley Arabian in Kentucky.

Over the April 18-19 weekend, Gina and Biscuit completed their first 75-mile ride. Biscuit still had energy at the end of the ride, and passed the vet checks with flying colors. At the end, the only comment from the vet was that the long billets on Gina’s Specialized saddle caused a sore spot on Biscuit’s side. So Gina is switching to a Toklat Matrix English Endurance Saddle Pad that extends down past her saddle skirts a bit more to provide protection from the billets. They finished the 75-miler in the dark and Gina had a chance to use her headlamp. It spooked Biscuit, even after 60 miles, so she recommends practicing with one before you really need it.

Gina commented, “Biscuit’s sire is Dymoni RSI and she was so lazy I never thought she would make an endurance horse. But these days, I’d like to have a little of that lazy back!”

Stay tuned for more updates on the two Action Riders on the road to Tevis!

Ava Lee is six years old and is riding her mini mare, Dream, who is fourteen. They are such an adorable pair – we found them irresistible. Ava Lee and Dream have been together since Ava was a toddler. They’ve always had fun playing together but by age four, Ava Lee wanted to start riding out on trails with her mother. So, even though Dream had never been ridden, she started riding her!

Ava Lee’s mother continued Dream’s training and last fall Ava Lee started taking her out on trail rides. She is now six-years-old and is hoping to do lots of riding on her little mare this summer before she gets too big for her. 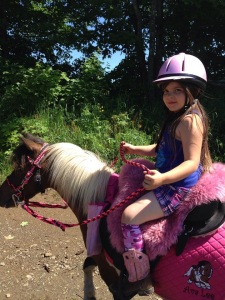 Ava Lee is riding in Barefoot Cheyenne Treeless Saddle – in a size zero. Her mother states, “She loves it! It’s hard to fit ponies /minis as most pony /mini saddles have too small trees! We love her Barefoot. It fits her little mare so well! She also uses it on her APHA gelding.