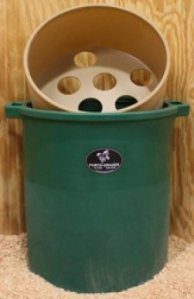 feeders designed to slow down the feeding of horses.

This is so important because the latest research shows that horses with empty stomachs are more prone to ulcers. At Action Rider Tack, we found and carry the Porta-Grazer.

BTW – One of my mares likes to tip things over. The Porta-Grazer will tip over, and most horses do try this, but they also learn to tip them back upright and keep right on eating.

When the Porta-Grazer is first introduced, it is best to put some hay in the bottom and some hay on top of the restrictor pan. I found my smarter horse figured out how to eat from it in about 24 hours. It took my sweet but less than clever horse a couple of days.

The Porta-Grazer is also available with a lid which can be used as a water bucket.

This thing works so well at an endurance ride, where my horse would usually have her precious water bucket tipped over during the night. I started using the Porta Grazer for her water, not only has she not tipped over the water at a ride, but it holds plenty of water for her!